“Makerspaces, making, and the maker movement have become frequent conversation topics among librarians. We’ve encouraged making in the library through programming focused on writing, drawing, designing, building, coding, and more. As informal learning and gathering spaces, libraries are by nature situated to invite collaboration and discovery. In many cases, making has been associated with makerspaces — independent spaces that provide tools, materials, and support to youth and adults with an interest in creating (Educause, 2013). Sometimes makerspaces are flexible, subscription-based environments, sometimes they are hosts to structured programs and classes with an attached fee. Some have a technology prominence with 3D printers and laser cutters, while others lend an artistic attention  by supplying sewing machines and design software (Moorefield-Lang, 2015). No two makerspaces are the same, just as no two makers are the same.

I first became interested in library makerspaces while touring Chicago Public Library’s not yet open to the public Maker Lab and its already thriving YOU Media during ALA Annual 2013. I love the playful atmosphere of learning and opportunity for exploration that these spaces offer teens. Then I dug into some publications. There is a significant amount of research about how youth learn as a result of participation in making and makerspaces (Sheridan et al., 2014; Slatter & Howard, 2013). Likewise, there is a wealth of blog posts, magazine articles, social media blurbs, TED talks, etc. on makerspaces, STEM learning programs, and the maker mindset (Fallows, 2016; Teusch, 2013). It can be difficult to separate the hype from the substance, but there’s still much to explore, discuss, and figure out.

There are many positive aspects of youth involvement with making such as fostering inventiveness, introducing STEAM learning outside of the classroom, and promoting learning as play. But in this post, I will focus on (what I think are) two major benefits of youth making in libraries that may not be quite as obvious: cultivating a capacity to create and learning to fail.

The first is perhaps the most obvious. Making in the library emboldens youth to move from passive content consumers to engaged content creators. This is an idea that has been discussed over and over again in research and during discussions about making in the library, but it still rings true. By connecting with a teen’s interests and curiosity, libraries nurture inventiveness and originality. Additionally, librarians can provide support for making by introducing tools, techniques, and skill sets that may be outside of everyday experiences (Bowler, 2014). This feeds from the library’s role as an incubator for youth development through active engagement in services such as programming, mentorship, and more. Making highlights the best of Connected Learning, which “is socially embedded, interest-driven, and oriented towards educational, economic, or political opportunity.” (Ito et al., 2013, p. 6), a model that is deeply discussed in YALSA’s The Future of Library Services for and with Teens: A Call to Action.

Martin (2015) calls it failure-positive, describing failure as something that is celebrated by makers. Failure is a necessary part of personal and professional growth (Branwyn, 2009). We learn from failure; Much more so than success. When making, you encounter a significant amount of trial and error. You tinker with a project, testing out what works and what doesn’t, troubleshoot, and repeat the cycle. In makerspaces and maker programming, there is an expectation that missteps will happen and questions will be asked. By allowing space for failure and recognizing that failure is okay, libraries support a teen’s burgeoning self-esteem, confidence, and determination. Failure is critical because it teaches youth that there are many different ways to achieve success. If you have a goal, you may fail (more than likely will) at your first effort. Instilling a willingness to try and try again in teens can be done through the supportive efforts of librarians. Failure should not define you, but help you thrive (Fallon, 2017). 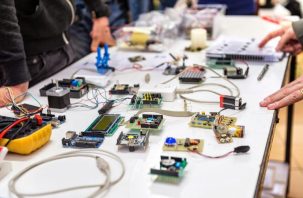 Where does a teen librarian begin?

Whether or not your library can afford or has the space for a makerspace isn’t important. For a while it seemed that makerspaces and maker programming in general could only be offered in large, urban library systems with large budgets and staffing. But that’s no longer the case. Rural and small librarians are finding ways to bring inexpensive, adaptable, and small scale making into the library space. You don’t need to buy a 3D printer or high tech gadgets to get teens interested in making. Learn what your teens want from the library, find out what resources your community already supports, and steal ideas from other librarians. Since I’m posting to a YALSA-minded audience, check out the amazing resources they have. I’ve been lucky enough to collaborate on an IMLS-funded study focusing on supporting rural school and public libraries in facilitating makerspaces and maker-oriented programming. Looking forward to sharing more of what my research team discovers about providing making resources for cost-effective and do-able programming in small and rural libraries. Keep an eye out for resources and other helpful information about making in libraries on our website.”

Educause. (2013). 7 things you should know about makerspaces. Educause Learning Initiative, 1–2. Retrieved from https://net.educause.edu/ir/library/pdf/eli7095.pdf

Fallon, A. (2017). The positive benefits of failure. No Sidebar. Retrieved from https://nosidebar.com/benefits-of-failure/.

Improving mental health in academia by giving you a voice.

Queering up your shelf, one rec at a time!

Blog of the New Members Round Table of ALA

The premise of this journal club is to discuss articles and blog posts about Diversity in STEM and academia. We post the paper/topic the 2nd week of the month, and discuss the third Friday of every month at 2pm EST, under #DiversityJC on Twitter. Hope to see you there!

What I don't know. Yet

here, queer, and ready to read

wrapped up in books

The Hub for Library-Social Work Collaboration